A Tribute to the True Optimist...


“Optimism” is an act
that captures the entire essence of goodness
and makes life worth living!
~ Jyotika Rajput Mehra Quotes

Today I feel honoured to share a real-life story of a true optimist. It is about a female who started her journey from being a fun-loving girl to a responsible young lady to a courageous woman…! With the phase of time, she got trapped in the stranded mode of destiny... but, never became its slave!

A beautiful girl was born into a wealthy family of Zamindars. Being the only girl child in the family, she was raised in the most pampered way. She was fun-loving, intelligent and creative. Her father, also being a popular marriage broker, always used to promise that he would choose the best groom among all when it would be her daughter’s time.

Unfortunately, he passed away soon and the girl kept wondering about the “promise”. Gradually, her brothers (3 elder and 1 younger) got busy in their own lives, giving her negligible attention.

Time flew and the girl turned into a charming young lady. She started working and became financially independent. People used to denote her as the perfect blend of “beauty, brain and behaviour”.

In the course of time, her mother became a victim of a grave disease. Her 3 elder brothers moved on with their lives, got married and settled in separate homes. The younger brother couldn’t help much because he himself was struggling to find an earning.

The girl started realising the changed circumstances – it seemed that she alone was responsible for taking care of her ailing mother (both, physically and financially) and also finding a right match for herself.

At times she used to feel shattered and lonely. Indeed, it was a complicated time! But her inner voice never let her lose hope and her optimism kept her will strong. She was all prepared to take charge of her life…all alone!

Soon, a neighbourhood acquaintance made her meet a young foreign-returned lad looking for a beautiful match. The guy was so much enchanted by the mesmerizing beauty and simplicity of the lady that he could not think of any other girl now! Though, he was not as good-looking as the lady, but was too keen to marry her.

Sadly, there was one thing which was screwing the lady’s desire – she wanted somebody from her own community and culture but this guy belonged to a different one. Hence, she decided not to fix things in haste and take some time. Even her mother and brothers felt that life would be uneasy due to culture-clashes.

Few months passed by and she couldn’t get a convincing match from her community. Also, seeing her mother’s condition worsening each day, she did not wish to wait much and agreed to marry the guy. She was happy with the fact that the guy was self-made, wealthy, did what he liked, and cared a hoot about the world!

Soon, in the initial months of marriage, the man’s snobbishness started bothering the woman. She used to make her best attempts to create a perfect chemistry with him but failed each time!

Ironically, the reason was the man’s punitive behaviour – it was absolutely weird and non-digesting for her – it was something she had never observed earlier in life – she never knew such rigid and canny men. She felt her agony surging each day! This was something she could never share with anybody… not even with her mother, because she was sick! It was just the woman’s strong belief in God that made her move on…

Though the man appeared liberal sometimes but majorly used to follow old school thoughts. The conservatism was getting on her nerves, making her perplexed and guilty, thus diminishing her self-confidence. It was getting difficult for her to stay with such a dogmatic and fussy partner. However, her ethics never allowed her to disagree with him (because of the typical Indian belief – “Pati Parmeshwar Hai…! i.e. – “Husband is Almighty”…!)

Each time she raised her voice against the unjust, he used to suppress her. He was demanding, possessive and always used to impose his wishes upon her. Bizarre enough, he used to denote all this as his “Love” for his wife.

She probably knew that her husband never had wrong intentions, but he belonged to that category of people who just love to rule everybody and everything that comes in their way! Being an optimistic soul, the woman continued her journey with a hope in heart that things will transform one day…

In a year, the couple was blessed with a baby girl; and a few years later, a baby boy came into their lives. At this point of time, the woman promised herself – No matter what, her children will not undergo the plight of miseries she has gone through!

Though the children also paid the cost sometimes by giving-up on their desires but the woman always armoured the little ones. She used to give them the freedom which they were seeking. She always used to be there to sort out their problems. She became her children’s best friend… and her children became her biggest strength!

Meanwhile, 3 shockers came in the woman’s life at different phases of time…but could never shake her optimistic belief – Demise of her own mother; Severe collapse of her husband’s business; and Life-threatening instance with her daughter. Still, the brave-hearted remained resilient in all the difficult situations, and coped up with the despair and the financial crunch.

Years have passed by… and the woman has almost reached her retirement age today.
This “Woman-of-Substance” has sacrificed her dreams and passions just to serve her family (physically, financially and emotionally) and has always supported her children in making their wishes come true!

The most surprising part of this story is that the woman’s deep optimism and faith has transformed her haughty and stubborn husband… not completely though but now the man at least realises his mistakes and values his wife and children by showering his pending bit of love.

I feel sheer pride in declaring the woman as a “True Winner” who believed in the “Power of Optimism” and has exemplified it to the world. Undoubtedly she is my role model, my idol and my Goddess… She is my “Mother”!

And she is more than happy and proud of us – me and my younger brother.

The sad part, the gone by years can never be relived – the painful past can never be altered but by being an optimist, my mother has earned invaluable regards from each person who knows her. Optimism has helped her to cope up with the adversities and still stay content.

Life will be beautiful, only if you decide…
A coin always has 2 sides…
24 hours always include morning and night…
A candle never ever gives light…
Until and unless you make it ignite…!

Be an optimist, look up, spread your goodness and nobody can steal away your share of happiness!

Through this post I don't intend to upset my dad, because no matter what, my heart (as tamed by my mom) always has love for him!

* Author of this post reserves rights for the written content source being original work of art. Please do not copy without permission. ©Jyotika Rajput Mehra

* This post is purely based on the author’s personal experiences, feelings and perception.
a tribute to the true optimist housing.com IndiBlogger inspirational its my story - jyotika rajput mehra moral ethics and values personal real story of optimism relationships thought provoking

In this post, I am glad to share my journey of self realisation, and my perspective of the life transformational ancient practices of Inner Engineering. This is my 18 th year of Spiritual awakening…! I had always been attracted to the mystical powers of the universe and the metaphysical elements after a big life transforming incident when I was 10. I was fortunate to be gifted second life on Earth! :) Ever since my consciousness wandered to see the realms of truth, light, wisdom and enlightenment, my curiosity led me to a wonder trip to Goa where I experienced the beauty of my own self! It was 18 years ago that I was touched by the light of my spirit. It was the first time that I stayed away from my family for a stretch of ten long days! This vacation with my school friends was absolutely fun-loving, but there was something beyond fun! It was the identification of myself more than who I think I was… identification of myself more than my relationships, more than my cultu 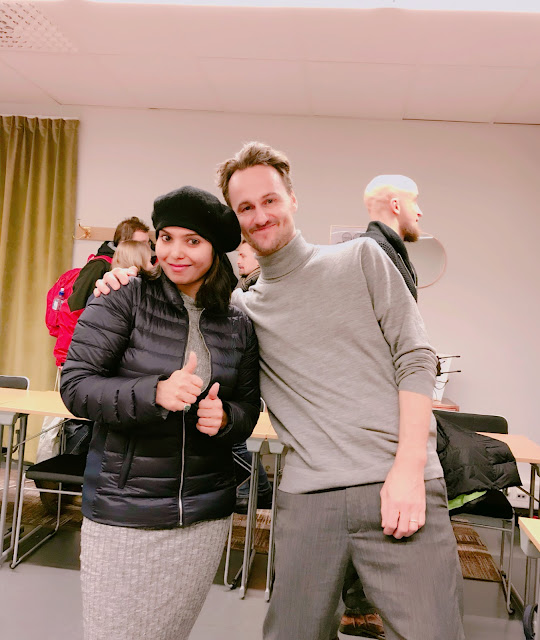 A dream, a desire, a wish, an urge, Ripples the chords of my heart in surge… A prayer emerges on my lips, As the Sun rises, as the Sun dips… “Oh Almighty, residing in the core of our spirits, Enlighten us all with joy, be our catalyst… Align our thoughts, words and our deeds, Make us mindful & fulfil our essential needs…!” Here comes my 3 rd  post in chronicles of the “Inspire Your Soul” series. :) This time the guest of our mindfully awesome talk show was Magnus Fridh  (one of the Co-founders of The Mindfulness App   and a renowned name in Sweden's spirituality realm). With Magnus Fridh - The Mindfulness App Talk Show [PS: These charismatic live talk shows are organised by Moritz, founder at Wolkify ). Wisdom gained in this session was absolutely mind illuminating! And I am truly ecstatic to share it with you... :) The wonderful session began with an insightful Q-A conversation between Moritz and Magnus. Moritz: What do you mean by 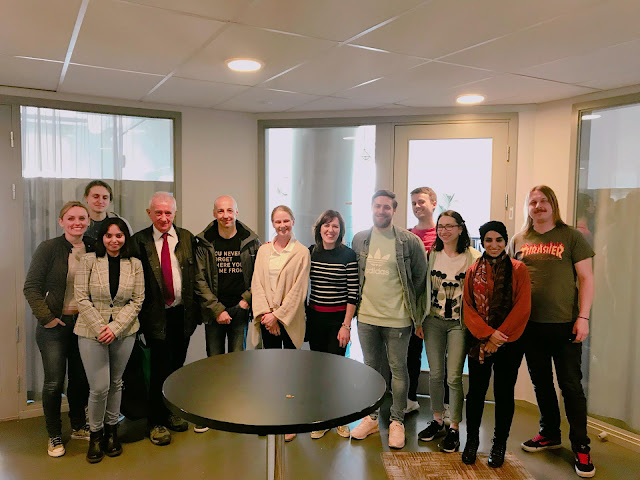 As an ardent believer of natural healing modalities, I leave no opportunity to gain new wisdom! May 5 th , 2018 had been an unusual day! I attended a special workshop arranged by my Toastmasters club. The guest of honour was Steven Hallmark who shared the virtues of a marvellous healing method called the “Alexander Technique”. (PS: Steven Hallmark has been an efficient Alexander Technique teacher since 1983.) In this post, I share about the session that unfolded to be immensely enlightening! Moreover, I am deeply touched by the awe-inspiring story of the founder of Alexander Technique! Kudos to the noble soul whose humble invention is spreading smiles on the faces of many in severe need of healing! "The Magic, the miracle is not a mystery The flaw and the cure,  both hide inside of you...  Just look within deeply!" Steven began by sharing his story... “There was a time when I had a bad back in my childhood. I went to Osteopath for cure. He to